I have a native raspberry plant in a small pot, which Kat and Kurt gave me. Not sure where they got it from, somewhere down in Wollongong. I brought that over to Tending already, hope to plant it somewhere… It’s already starting to fruit! [Here’s a forum where folks discuss the growing of this plant…]

And yes, as Diego suggests, I do want to plant potatoes!

For some reason, I have accumulated a lot of seed potatoes these past months, which I’m really keen to put in. Some of them are real gourmet Diggers Club taters, which I got from the lovely Jennie from Ashfield, via Freecycle.

Since Tending is an ‘experimental garden’, we were talking about trying 2 or 3 different ways of growing potatoes, to compare and contrast. [Here’s a nice little essay about growing potatoes, the author says they’re a ‘vanity’ crop… but still loves doing it!] 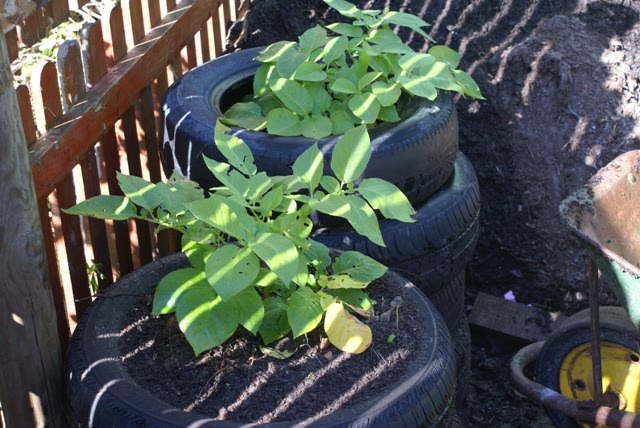 I have 4 old car tyres, which I pinched from the mechanic next door to Locksmith gallery last year (when we did the spontaneous recreation of Allan Kaprow’s tyre work “YARD” within our recreation of his “push and pull”. )

There’s another way of growing potatoes in a vertical ring of chicken wire, similar to the tyres method but a bit bigger. We’re gonna try that way too…

Thirdly there’s the method of just growing them in the horizontal garden bed, which takes more space. I had some good success with this method last year – I thought I’d pulled out all the tubers, but they keep on coming! And it’s so much fun to ferret around for ’em!

Well, I also have a couple of small rootstock citrus trees in my backyard in Petersham. Since we’re getting evicted, and the landlady hates my treeplanting ways anyway, maybe I’ll bring ’em along! A few years ago, I was about to rip out one of these little trees (a lemon I believe) because they don’t fruit. Louise, my flatmate at the time, chided me for my shortsightedness. All I have to do is learn how to graft! I haven’t had time to learn this skill yet, but perhaps Tending is the kind of place where citrus grafting can be tried out, without fear of failure!

I also have a gorgeous olive tree which I’ve grown from about a foot high, to its current 2 metres tall. Pending transplantation, perhaps the olive would like to join us too. I’m quite attached to it, and an olive tree certainly represents long-term thinking.